Z-Wave can be configured using the Z-Wave Integration in the Configuration menu, or manually using an entry in configuration.yaml 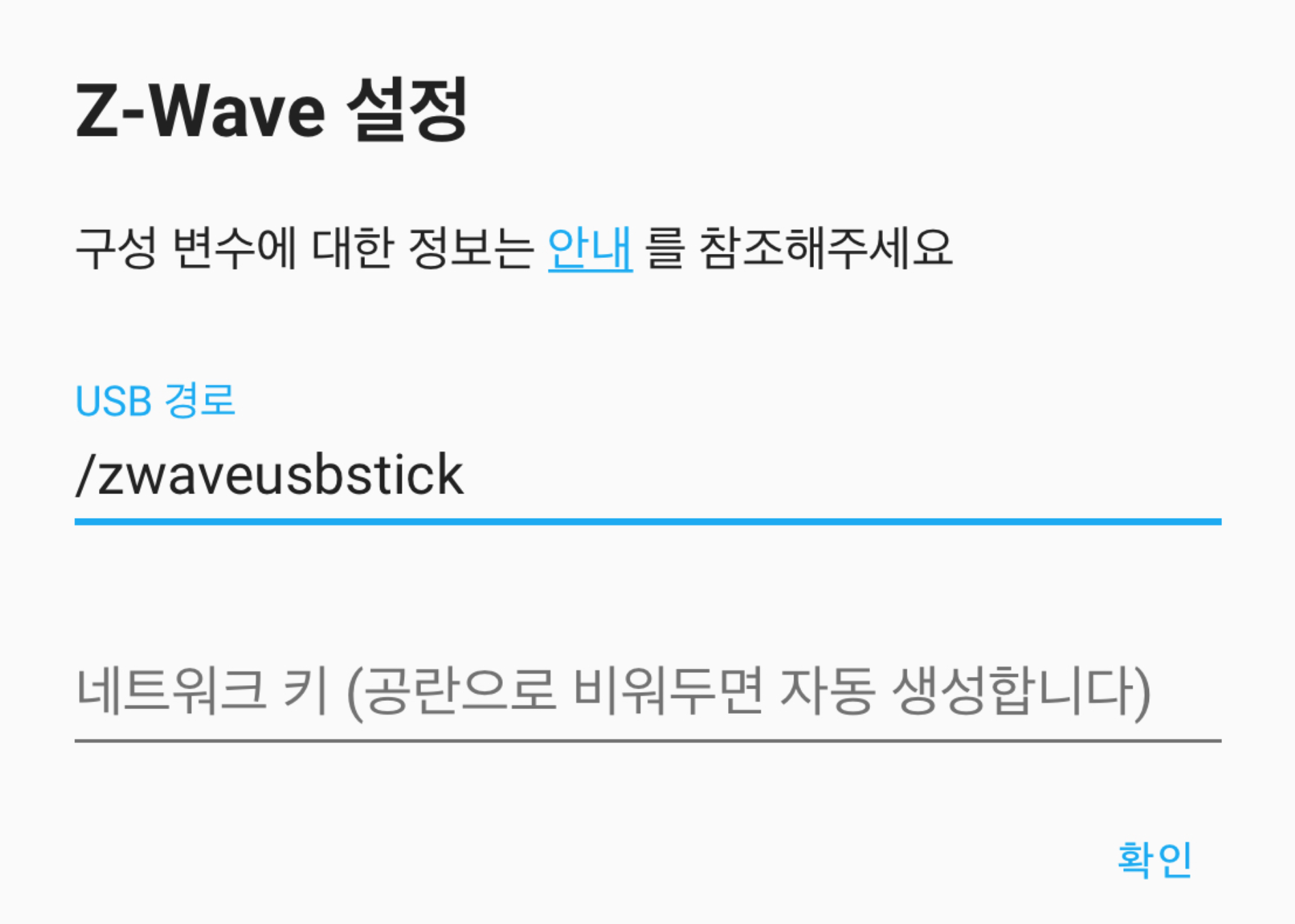 The 16-byte network key in the form "0x01, 0x02..." used in order to connect securely to compatible devices. It is recommended that a network key is configured as security enabled devices may not function correctly if they are not added securely.

The path to the Python OpenZWave configuration files.

the ‘config’ that is installed by python-openzwave

The time period in milliseconds between polls of a nodes value. Be careful about using polling values below 30000 (30 seconds) as polling can flood the zwave network and cause problems.

Allows enabling auto Z-Wave heal at midnight. Warning, this is inefficient and should not be used.

This attribute contains node-specific override values. NOTE: This needs to be specified if you are going to use any of the following options. See Customizing devices and services for the format.

Ignore this entity completely. It won’t be shown in the Web Interface and no events are generated for it.

Enables polling of a value and sets the frequency of polling (0=none, 1=every time through the list, 2=every other time, etc). If not specified then your device will not be polled.

Enable refreshing of the node value. Only the light integration uses this.

Specify the delay for refreshing of node value. Only the light integration uses this.

Inverts function of the open and close buttons for the cover domain. This will not invert the position and state reporting.

Inverts the percentage of the position for the cover domain. This will invert the position and state reporting.

An easy script to generate a random key:

You can also use sites like this one to generate the required data, just remember to put 0x before each pair of characters:

On platforms other than Hass.io and Docker, the compilation and installation of python-openzwave happens when you first enable the Z-Wave component, and can take half an hour or more on a Raspberry Pi. When you upgrade Home Assistant and python-openzwave is also upgraded, this will also result in a delay while the new version is compiled and installed.

The first run after adding a device is when the zwave integration will take time to initialize the entities, some entities may appear with incomplete names. Running a network heal may speed up this process.

You do not need to install any software to use Z-Wave.

If the path of /dev/ttyACM0 doesn’t work, look in the System section of the Hass.io menu. There you’ll find a Hardware button which will list all the hardware found.

You can also check what hardware has been found using the hassio command:

If you did an alternative install of Hass.io on Linux (e.g. installing Ubuntu, then Docker, then Hass.io) then the modemmanager package will interfere with any Z-Wave (or Zigbee) stick and should be removed or disabled in the host OS. Failure to do so will result in random failures of those components, e.g. dead or unreachable Z-Wave nodes, most notably right after Home Assistant restarts. Connect to your host OS via SSH, then you can disable with sudo systemctl disable ModemManager and remove with sudo apt-get purge modemmanager (commands are for Debian/Ubuntu).

You do not need to install any software to use Z-Wave.

To enable access to the Z-Wave stick, add --device=/dev/ttyACM0 to the docker command that starts your container, for example:

If the path of /dev/ttyACM0 doesn’t work then you can find the path of the stick by disconnecting and then reconnecting it, and running the following in the Docker host:

The modemmanager package will interfere with any Z-Wave (or Zigbee) stick and should be removed or disabled. Failure to do so will result in random failures of those components. For example you can disable with sudo systemctl disable ModemManager and remove with sudo apt-get purge modemmanager

On the Raspberry Pi you will need to enable the serial interface in the raspi-config tool before you can add Z-Wave to Home Assistant. Make sure to reboot the Raspberry Pi for the setting to take effect.

On Debian Linux platforms there are dependencies you will need to have installed ahead of time (included in systemd-devel on Fedora/RHEL systems):

You may also have to install the Python development libraries for your version of Python. For example libpython3.6-dev, and possibly python3.6-dev if you’re using Python 3.6.

To find the path of your Z-Wave USB stick, disconnect it and then reconnect it to your system and run:

That will give you a line that looks something like this:

Where the date and time displayed is approximately the time you connected the USB stick or module (it may also be something like /dev/ttyAMA0 or /dev/ttyUSB0). The number will be zero for the first device connected, and higher numbers for later devices.

Or, if there is no result, try to find detailed USB connection info with:

If Home Assistant (hass) runs with another user (e.g., homeassistant) you need to give access to the stick with:

The output from ls -ltr above contains the following information:

When installing on macOS you may have to also run the command below ahead of time, replace “x.x” with the version of Python ($ python3 --version) you have installed.

On macOS you can find the USB stick with:

If your device path changes when you restart, see this guide on fixing it.

If this applies to your situation:

Then chances are high that the ModemManager in the host OS is causing the issue, claiming or interfering with the USB Z-Wave stick like the much used Aeotec ones. In this case you need to disable ModemManager.

Connect to your host OS (e.g. Ubuntu) through SSH, then execute the following command on your host system to disable the ModemManager:

Component could not be set up

Sometimes the device may not be accessible and you’ll get an error message upon startup about not being able to set up Z-Wave. Run the following command for your device path (here we’re using /dev/ttyAMA0 for our Razberry board):

The important pieces are the first piece crw-rw---- and the group dialout. If those are different then, for your device path, run:

Check too that the account you’re running Home Assistant as is in the dialout group. For instance, if you’re using homeassistant:

That should include dialout, if it doesn’t then:

Then the problem is that you’re missing libudev-dev (or the equivalent for your distribution), please install it.

If you’re having random failures of the mesh, devices going missing, things randomly not working, check your OZW_Log.txt for the following messages:

If you see any of these messages repeated in the log then probably you’ve got something else running that’s also using the Z-Wave controller. That might mean you’ve also got the OpenZ-Wave control panel (ozwcp) running, a second instance of Home Assistant or something else. You need to stop that other process to resolve this.